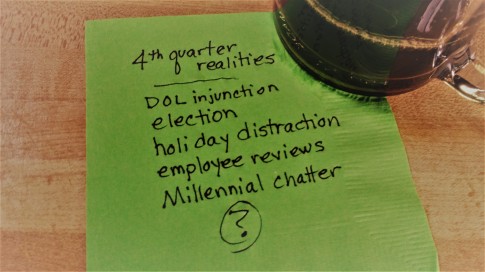 “Tactics without strategy is the noise before defeat.” Sun Tzu…

Post 1 0f 3: “So I’m feeling a little foggy after last quarter, and I’m realizing that some of my people are starting to look for greener grass – or maybe just different pastures.  It’s not even anything I can prove; it’s just a sense.  Do you feel it?” Ron looked across the table at his supervisor colleague, Fisher.

“There is an odd atmosphere…. So many people vaguely reference how they feel about the election; it’s as if they are hesitant to show excitement about new possibilities.  Then there is a significant group who voice assumptions that everyone should be terrified, as they are, about some unknown evil that will soon swallow up their status quo.
“But I agree, a percentage of my team is starting to comment more freely about seeking other opportunities.  I don’t have a clue if that is good or bad for them, but I have begun to think about what I can or should do about it.” Fisher paused, “Should we be doing something different?”

“With the injunction pausing the FLSA overtime law coming just days before its implementation, employees were educated on it enough to start to look forward to the simplistic messaging of ‘fewer hours and higher pay.’  I think that messaging, along with the election results and holiday-party chatter, has fostered a bit of the zeal to look for something new.
“But I do have some thoughts on what we can do as supervisors.” Ron paused for another swallow of coffee.  “Being honest with our bosses about our perceptions is one consideration; I hate it when things happen and I can’t say, ‘I told you so.’  So sharing my hunches – labeled as hunches – has been a tactic I’ve found gratifying.
“But lately this feeling has also prompted me to take a new look at my team.  I’ve redoubled my effort to re-recruit my best players; I had started it because of the DOL changes, but I think that is where I want to adjust some tactics and continue to put my focus in response to this undercurrent of unrest.”

Fisher stood up.  “I’d like to hear more about how you are identifying those you want to re-recruit or keep on your team.  I am in the camp that is not so confident about what is coming in the next couple of years, so I think focusing there will at least give me a strategy for the short term.
“What if we go off-site for lunch tomorrow and talk about this?  Would you mind sharing your thoughts?”

“You know me better than that.  I love sharing my thoughts!
“If nothing stops our getting away for lunch tomorrow, I’ll come to your cube late-morning, and we’ll pick a time & place.  See you then.” Ron made an entry in his phone as Fisher left the table.

Reality: Change is frightening for most people.  We’ve seen the common responses of fight or flight around us in many aspects of life as people face fearful situations.  It is natural for us to consider fleeing from our jobs when we fear coming change or have a questioning distrust of the people planning to lead those changes.

FOLLOW US & don’t miss the next PEPPERBOX blog: Why does Ron think the current unrest warrants a strategy identifying the most valuable members of his team?

Help us improve our posts

Need a coach to help with application of this topic?