Feelings count… to employees they count as much as wages & hours… 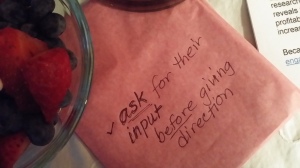 Post 1 of 3: Old friends – Dennis, Tanya and Josh – are managers for different companies and try to meet monthly for lunch. They have found the lunches to be safe times to discuss and get honest input on leadership challenges they face in their work.

One month, knowing Dennis’ very direct style of leadership, Tanya shared a communication principle she had run across and asked for the opinions of her two friends. The principle was to ask for employee input before telling them what to do or advising them on your solution. As they were finishing their meal, Josh suggested they each try the idea before their next lunch and see if there were discoveries worth sharing.

Dennis was the one that brought up the topic the next time the three were together – probably because he was the most surprised by the result. He supervised a crew that did custom finish-work for building contractors.

“I tested your idea, Tanya, by asking one of my guys if he had any ideas for a complex job around some weird kitchen angles. He did great! I discovered a skill in one of my men that has already saved me time because I can delegate those jobs and trust his decisions without standing over him. In fact, that’s not all I saved using this idea… and I admit that initially I thought trying this idea would be a pain!
About two weeks ago I asked a couple of the guys, who have been on the crew a while, for some ideas on how we could cut back on materials costs. Just by asking, I not only got a couple of good ideas, but I’ve even noticed several guys making conscience decisions that reduce waste on their individual projects. That kind of initiative has just never happened before! The research I’ve done on this month’s materials totals looks like the changes are moving us in the right direction.”

Tanya was thrilled with Dennis’ discoveries, “Remember to share those savings with your crew and let them know how they could benefit from continued effort,” she prompted. She had always thought Dennis would have better results if he could engage his crew to take more ownership in their work.

Reality: Asking for input can spark willingness, insight and creativity in others. These employee traits can increase results and decrease leadership stress! Failing to ask for input before telling others what you want them to do can crush feelings of empowerment and confidence: we all lose.

FOLLOW US & don’t miss the next PEPPERBOX blog: Find out how this principle worked for Josh with his sales team.